Charlie’s Angels Comics from Lebanon to Argentina: Classic 70’s comics of the crime fighting babes found new homes thanks to eBay. An Arabic comic from Lebanon drew a bid of $6 while a set of three from Argentina went for $22. I guess there’s a market for everything. (auctions #2174227095 #2175619671) The movies have revitalized this franchise as Welcome Back, Kotter, A-Team, Police Academy and other spin-off comics have weak sales. 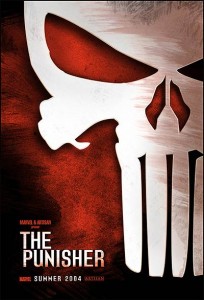 Misc Movie Notes: Artisan has shipped the teaser poster for next summer’s “The Punisher” - check it out. Variety reports Bill Murray will voice “Garfield” which is wrapping most of the principal photography. Rachel Talalay (‘Freddy’s Dead”, “Tank Girl”) will be directing James Marsden (Cyclops from “X-Men”) as Jesse Custer in “Preacher” while Christopher Nolan is on board for a “Batman 5″ with a David S. Goyer script (Blade series and upcoming “Freddy vs. Jason”).

The Heroclix craze: Heroclix is a game by Wizkids that allows you to create a team of comic book characters and compete against other teams using each character’s strengths and weaknesses. The characters (DC and Marvel have sets out) are small, painted figurines that stand on a dial with all of the necessary information. There are no charts and stat sheet to keep up with. Role-playing is more interactive than card games (there are props and playsets) and the figurines are really cool! The secondary market is taking hold of the more powerful and popular characters: Limited Edition Natasha Romanoff #119 is over $100, a level 3 Dr. Doom is around $35. More on Heroclix next week.

Keanu’s undies fetches ten grand: Keanu Reeves visited a local radio station in 1995 while on tour with his band Dogstar. MJ, the host of the show, ask the star to autograph a pair of briefs. With “The Matrix: Reloaded” elevating the popularity of Reeves, MJ coordinated a auction on eBay with the proceeds going to charity. The winning is over $10,000 – a hefty price for the unique item, but it does all go to charity.

CHECK OUT THE VIDEO BELOW

I’m in Sports Hell: Ruben Rivera managed to touch second base three times in the most heinous attempt at base running I’d ever seen. Rounding second from first, Rivera was duped into thinking that he needed to go back to first. Of course the other runner met him between first and second as Ruben turned around (that’s the third time he touched second) and headed to third. The throw was flubbed – Ruben is safe, so why not run home? Out at home, Rivera proves that skills learned in little league are long since forgotten.

Meanwhile, Michael “The Monster Truck” Pittman drove his spouse off the road after a dispute of their child. He is a repeat offender of “abuse” this incident violates his probation. I’m sure anger management classes and community service will be administered, even though this athlete has an apparent problem. To site Fisher from the local radio show, 97 X – Pittman will probably say he got carried away while listening to Prodigy’s “Smack My Bitch Up”.

Lastly, Sammy Sosa and his corked bat that is for batting practice — oh hell, can’t anyone be accountable anymore. I guess a small fine and/or suspension will be satisfactory for cheating. Ask Pete Rose about the integrity of the game.

Brandon Jones - Writer and Co-Founder of The Global Dispatch, Brandon has been covering news for Examiner, starting and writing for several different websites including the diverse blognews site Desk of Brian.

Please read the statement on the war in Ukraine. Dismiss ✖