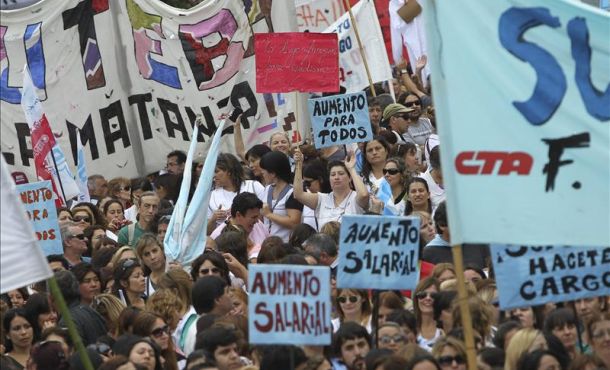 The 17 days the teachers were on strike exceeds the total number of strike days during all of 2013, and was the longest educators' strike in Argentina in 10 years. EFE

Buenos Aires, Mar 31 (EFE).- Almost 3.5 million students resumed classes on Monday in Argentina's most-populous province after the teachers there ended their longest strike in the past 10 years.

"We have to look ahead and with the commitment of the entire community continue working to improve education," Buenos Aires Gov. Daniel Scioli said upon inaugurating classes at a school in La Plata, the provincial capital.

Scioli asked people "to leave the conflict (with the teachers' unions) behind" after on Saturday the educators decided to return to the classrooms after accepting a general pay raise of 32.5 percent, with a 38 percent hike in pay for new teachers.

The provincial government is seeking alternatives for recovering the lost school days including adding extra hours to daily classes or holding classes on Saturdays, but the unions are opposing those potential moves.

The 2014 salary increase for teachers will mean an additional expenditure this year for the province of 19 billion pesos ($2.37 billion).

The 17 days that the teachers were on strike recently exceeds the decade-high number of strike days during all of 2013.

Pay negotiations in the education sector are some of the most conflictive in Argentina because they are considered to be a bellwether for demands by other unions.

Please read the statement on the war in Ukraine. Dismiss ✖