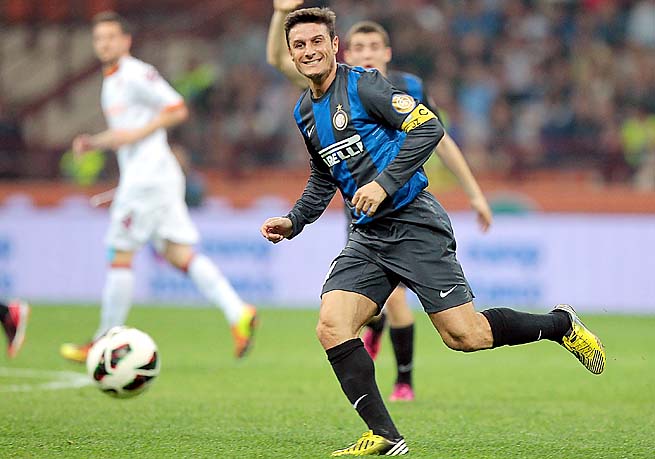 Inter Milan captain Javier Zanetti had a successful operation for his ruptured Achilles tendon on Tuesday and will be out of action for about six months, his doctor said.

The 39-year-old, who has played more than 840 games for Inter and has a record 145 caps for Argentina, remained unflappable throughout, surgeon Franco Benazzo told the Inter website (www.inter.it).

"The operation was a complete success, it lasted around an hour," said Benazzo. "He'll have his foot in a cast for the next three weeks and won't be able to walk on it, then he will start to walk in phase two of his physiotherapy.

"As ever in cases like these, we're looking at six months out of action, just as we've seen from other examples in recent times.

"Was he relaxed going into theatre? What do you think? Have you ever seen Zanetti worked up? He was very calm and relaxed. Was his hair in place? As ever."

"His incredible physique will give him an advantage. He has proved it by playing until (nearly) 40 and he will do so again," Benazzo added.

"Locally the muscle mass will decrease slightly during the time his foot's immobile. But the Inter medical staff have shown over the years that they can get players fit who have suffered from more serious injuries than a snapped Achilles.

Zanetti suffered the injury during Sunday's 1-0 defeat at Palermo in Serie A.